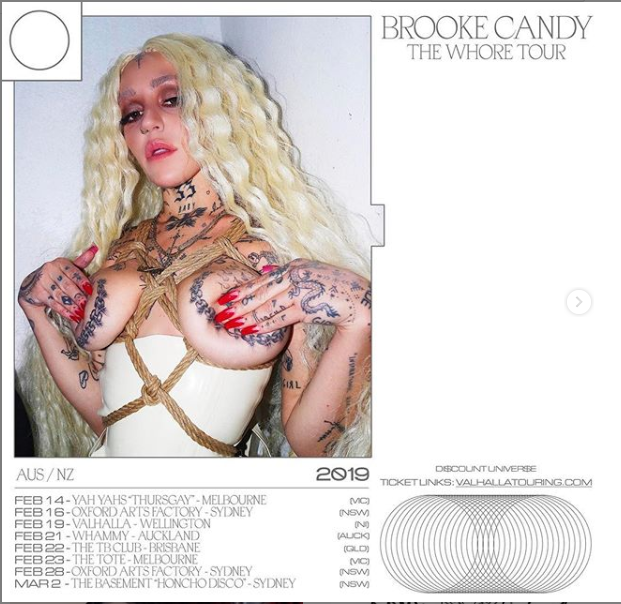 Brooke Candy is a rapper, singer, dancer, performance
artist and fashion muse from Los Angeles. Her self-made
music videos have garnered millions of views around the
world and shaped a uniquely devoted and interconnected
fan base of like-minded freaks, queens and queers.
Candy’s musical career began with an outlandishly
stylized video for her late-2012 banger “Das Me,”. By
that point she was known for her cameo appearance in
“Genesis” by Grimes. Inspired in part by ’90s rapper
Lil’ Kim, Brooke’s musical career stands out with her
uniquely blunt sound and hyper-sexual explicit songs
presented in colorful videos.

She released her Opulence EP in 2014 that features the
popular single “Rubber Band Stacks”. The SoCal native
went on to endorsement deals with Diesel industries and
two sell-out collaborations with Mac Cosmetics.
Throughout 2016 & 2017 she released a string of Spotify
singles “Happy Days”, “Nasty”, “Changes” and the pop hit
“Living Out Loud”, which went to #4 on the dance charts.
The self-identified queer artist separated with her record
label Sony RCA in 2017 to get back to her punk inspired
roots. Brooke took her new sound to The Roxy Theater
on the Sunset Strip, wowing fans with her new edge.