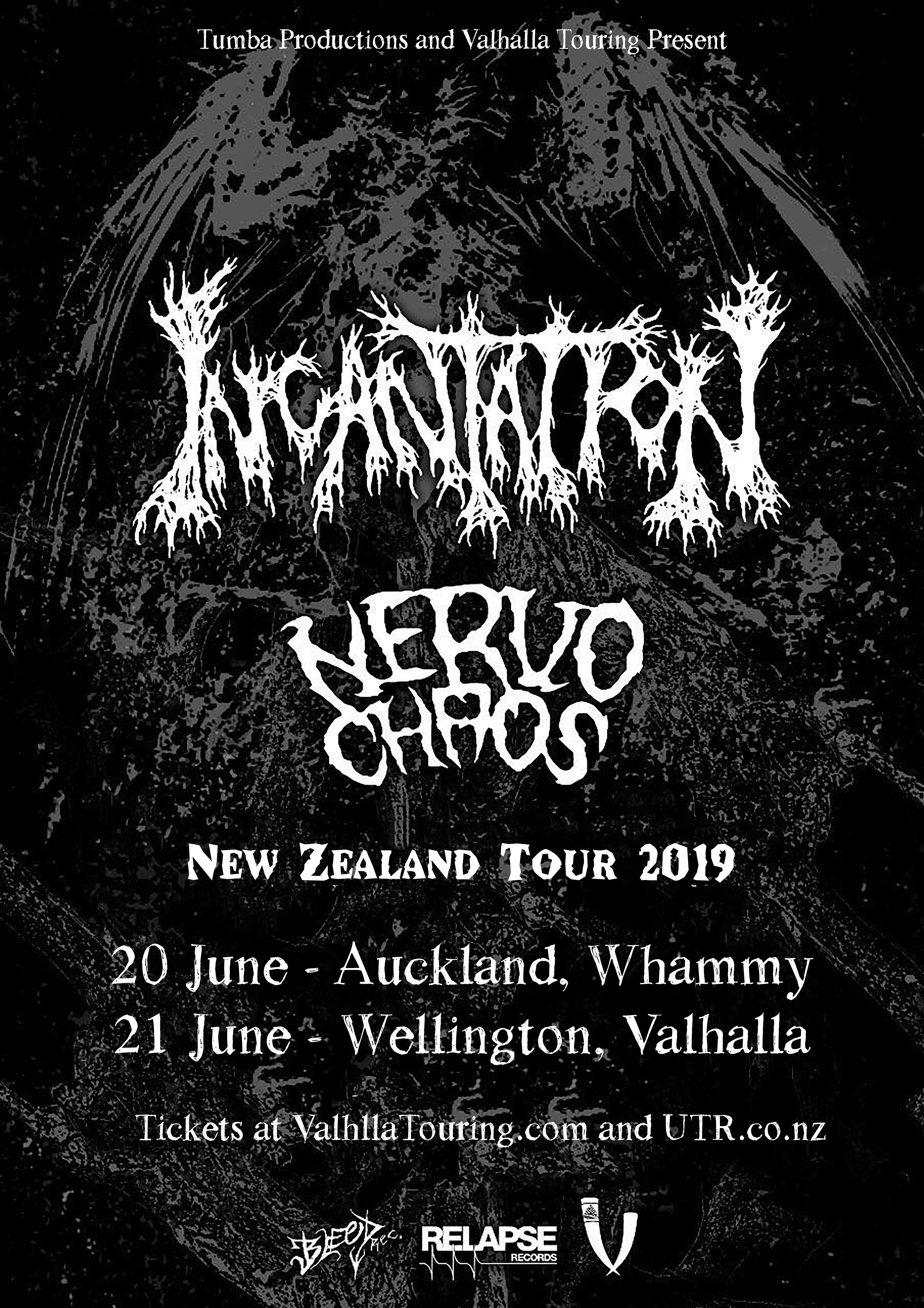 New Jersey Death metal pioneers, INCANTATION , are coming to spread Doom across NZ in June. INCANTATION were Spawned deep within the American subterranean realm of unsanctity, coming out of the era that saw Cannibal Corpse, Death, Morbid Angel, Entombed, among many others, rise and change the face of metal. INCANTATIONS first groundbreaking album, Relapse Records-released Onward To Golgotha – was a musical scripture of spine-chilling and inhuman sounds that took listeners by storm. A bleak and suffocating trip through a doom-infused purgatory, Golgotha was the first of its kind. With over a quarter-century under their bullet-adorned belts, INCANTATION main-man John McEntee, and longtime drummer Kyle Severn, have proven that age is certainly not a predetermining factor as it relates to brutality and longevity. Throughout the formative years, INCANTATION continued to spread their demonic reign, releasing three more unholy testaments with Relapse including: Diabolical Conquest (1998), Mortal Throne of Nazarene (1994) and The Infernal Storm (2000). Approaching the latter half of 2017, INCANTATION proved – once again – that their vertigo-inducing, ever-spiraling blackened mass of death metal malevolence is as expansive, infinite and bleak as the coldest, darkest reaches of our universe. At the pinnacle of their storied career, the guys have engineered a brand new weapon of anti-biblical proportions. This weapon, entitled Profane Nexus, comes armed with eleven tracks of musical antipathy, impregnated with the bands inherent, unrivaled, visual and lyrical depravity.

Supporting these death metal heavy weights comes, NERVOCHAOS! These brutal musicians came together and formed NERVOCHAOS in the spring of 96, Sao Paulo, Brazil, with the idea of creating an aggressive and chaotic music. NERVOCHAOS gained cult status in the extreme music scene due to their hard work over the past years, offering a sonic extravaganza in their unique way. First releasing 4 track demo tapes such as , Nervo Chaos (1998) and Disfigured Christ (2000), the band soon moved on to releasing full length albums such as Battalions of Hate To The Death,The Art of Vengeance, and Nyctophilia .In 2018, the band release a 4 track demo-tape, Of Evil And Men, and after, with a new line-up, continues to promote their latest releases. In August, they entered the studio and recorded a new full length album called Ablaze, to be released in 2019 and followed by a worldwide tour. The band is not afraid of performing live or touring following several tours worldwide sharing the stage with acts such as Venom, Cannibal Corpse, Krisiun, Napalm Death, Kreator, Biohazard, Dismember, Agnostic Front, and many more! Having played alongside INCANTATION before, this pairing is set to be heavy and ruthless, not to be missed this winter!