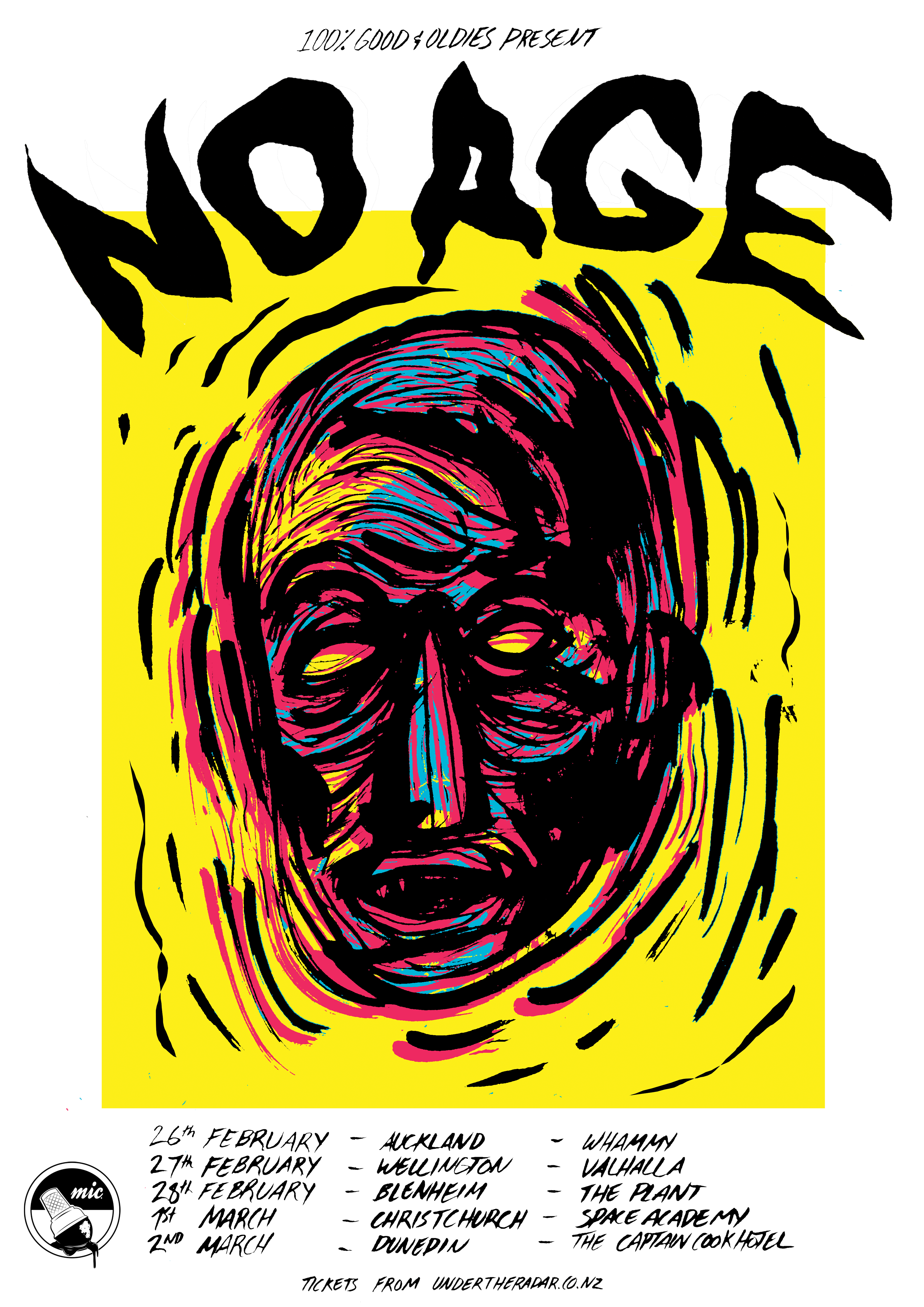 100% GOOD & Oldies are thrilled to announce the return of indie-rock heroes NO AGE! Last gracing our shores in 2009, No Age are marrying their untouchable noise pop with ear-shattering volume in an immersive live setting. Rifling through the bands discography from past touchstones to the newest rage Snares Like A Haircut, No Age’s pell-mell push of punk sanded down on the edges with pop sensibility and raucous noise will leave your ears permanently ringing.

With the world around us bruised and bloodied with teeth already dug into the concrete curb, we find ourselves with the shadow of a large boot looming overhead. What better time for No Age? Remember, they are the ones who first brought you the hospital-bed-feel-good-anthem, “Get Hurt” (2007). They know how to ecstatically rage and power on thru pain, because what else are you gonna do? The future belongs to the cockroaches, and this record is made for the disparate band of misfits who 2017 couldn’t kill.

Yeah. New No Age! Not new age No Age (except for the odd “Sun Spots”/“Keechie”-style shimmer that only ever makes everything better), but definitely an age of album-making located somewhere beyond and back from where we last heard ’em in aught-13, when they’d wrapped their process in as much deconstruction as An Object could bear. Reimagined rippers, compelling ever forward; something that provokes challenges on the ear — that was always the goal, but after a few years spent not No Age-ing, just working on that thing called life, is it any wonder that Dean and Randy wanted to pump out some rock and roll for the black hole? Does time mean nothing to you? Don’t answer that.

Snares Like a Haircut sounds like the good shit, and smells like the buzzy burning off of an aura, the marine layer suddenly vanished, leaving a thin layer of smog over the songs, simmering sock gazing tunes, revved and displacing enormous amounts of sound soil. This is pure driving music, for the bus racer and the car driver, with too many signs, bells and little lights flashing, ticking away. This is a record for the Foothill and the Valley, with a chemical sunset flowering at the end of every day. It’s a feeling made by driving music for driving music.

Recorded in a few days and mixed forever, Snares Like a Haircut finds No Age in full on mode, because there was nothing else to do but go full on. In the songs inside the songs, the thumpy/thwappy drums, the desperately voiced paens to determination, the churning and the stinging-but-shiny fuck-it built into the structure, a promise from the 1980s echoes once again across today, for the undetermined in-between generation reality seekers.

With Snares Like a Haircut, No Age scrub the itch in the little moments, engage actively with the process and carve/plaster/shave something in an album shape that’ll last.

You don’t have to drive, but you can’t stay here. Let No Age do all the driving for you. Snares Like a Haircut.