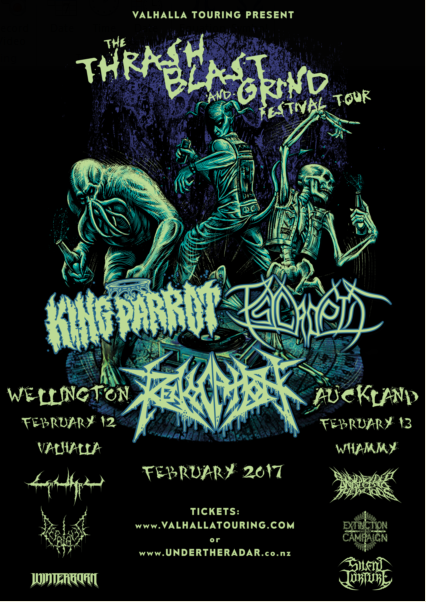 What would a Kiwi summer be without a touring music fest – pretty bloody average to be honest! So, this summer sees the debut of the “Thrash, Blast and Grind Fest”, kicking off around New Zealand February 2017.
The first announcement boasts Australia’s bastard sons of grind King Parrot as the headliners, blast titans Psycroptic and alongside them are US heavyweight death/thrash giants Revocation. 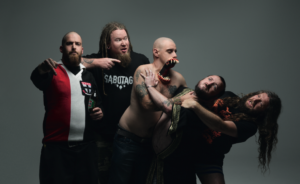 Youngy from King Parrot states:
“We’ve wanted to put on a great value NZ tour with awesome local and international bands for sometime now. Thrash, Blast and Grind Fest has given us this opportunity. Once the full line-up is announced we’ll be proud to stand behind a new fest that is diverse, value for money and in the best venues in Australia and NZ. A true touring fest by the bands for the fans.”

“Thrash, Blast and Grind Fest” debuts at a time when there is a distinct lack of Australian and New Zealand heavy music festivals, and gives something back to fans and devotees of the more extreme side of music – starting from a grass roots level. Founded and curated by the bands who will be appearing, the touring fest is DIY taken to the masses. 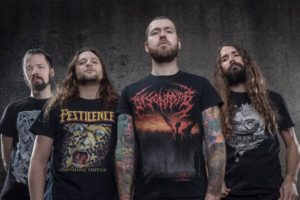 Brett from Revocation had this to say:
“We are so excited to hit NZ for the first time, alongside King Parrot! It’s been a long wait to shred NZ & we are especially psyched for the ‘Thrash, Blast and Grind’ Fest tour. We look forward to bringing the new material over & can’t wait to hang with all of you! Cheers cunt!”
With a large 2nd announcement still to be made in the coming weeks, including national and international acts, the touring festival will also throw the stage open to a local act in each city to open the show. This is one Summer show you cannot miss! 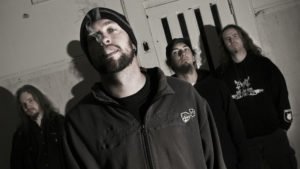 Get your tickets now and prepare yourself for a summer of thrashin’, blastin’ and grindin’!