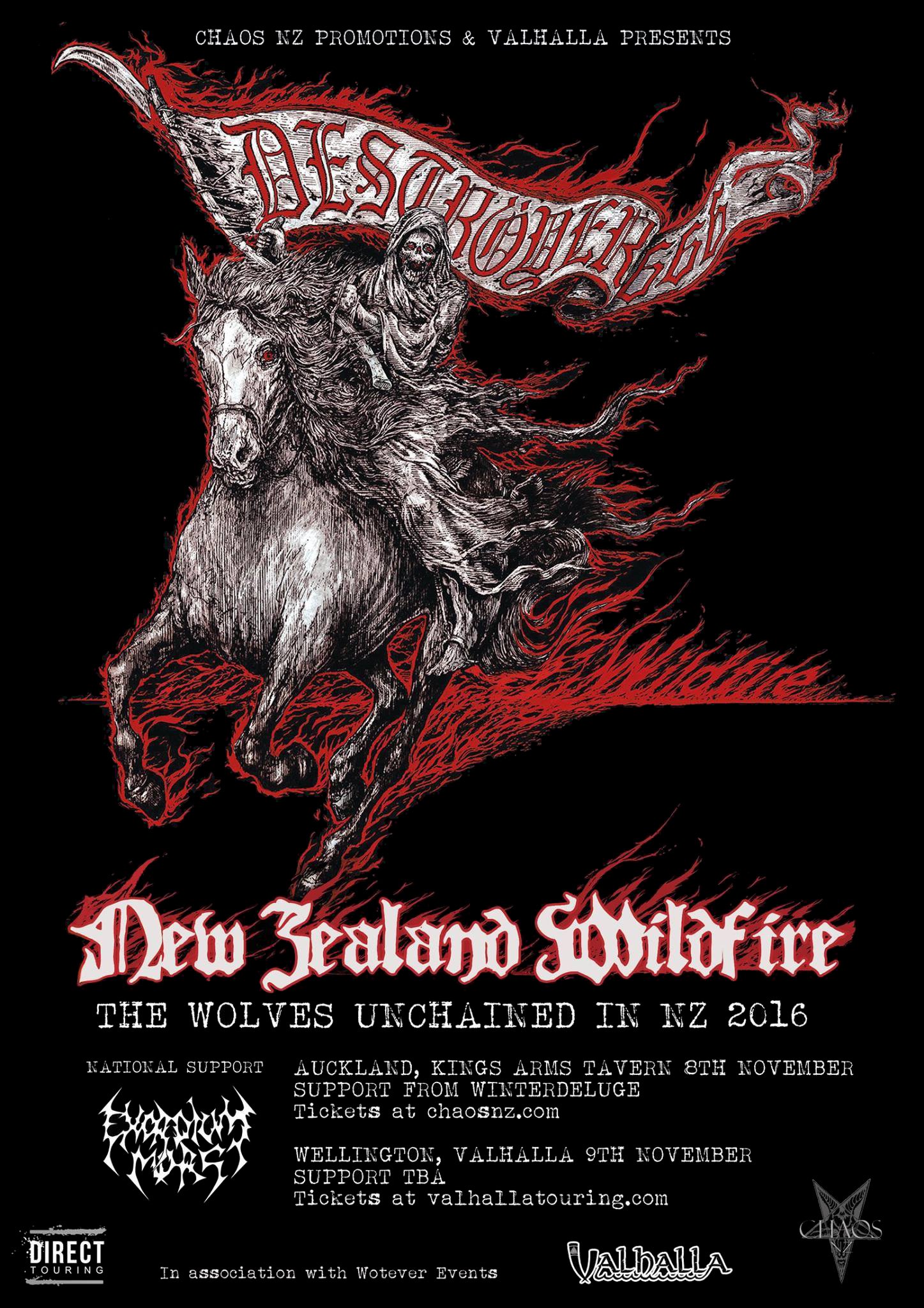 THE WOLVES UNCHAINED IN NZ 2016

Few bands channel the true spirit of Metal; Dangerous, Rebellious, Confronting, Unrelenting. Deströyer 666 not only embody this spirit, they live, breath and bleed it. This November will see them return home to their leaders birthplace to spread Wildfire:

Deströyer 666 have no need to prove anything. Unleashing five studio albums in their 20 plus year career they have cemented their reputation within the metal community and their latest missive, the recently released, Wildfire (2016 Season Of Mist) is another fist straight to your face. They are the pure essence of heavy fucking metal. 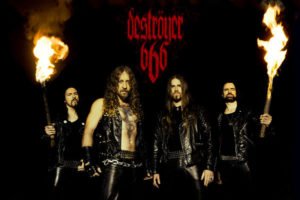 Lead from the front by the infamous KK Warslut, there is no ‘core’, no ‘post’ and no bullshit when it comes to D666. Old school without clinging to nostalgia, they have nothing in common with a bunch of kids trying to emulate the 80’s via some retro fashion and a cool patch jacket. Immune to fads, they have remained the same since the golden age of heavy music and have never wavered.

Wolves among sheep, following no trends, musical or otherwise; commanding respect wherever they venture, Deströyer 666 deliver metal as its best. Powerful, gritty and intelligent arranged with groove that can move mountains.

Witness a night of musical integrity few can claim to deliver. Deströyer 666 will grab you by the neck, wring it till it hurts and force on you a hellish emotional journey of blackened madness! No compromise, no quarter, prepare yourself! 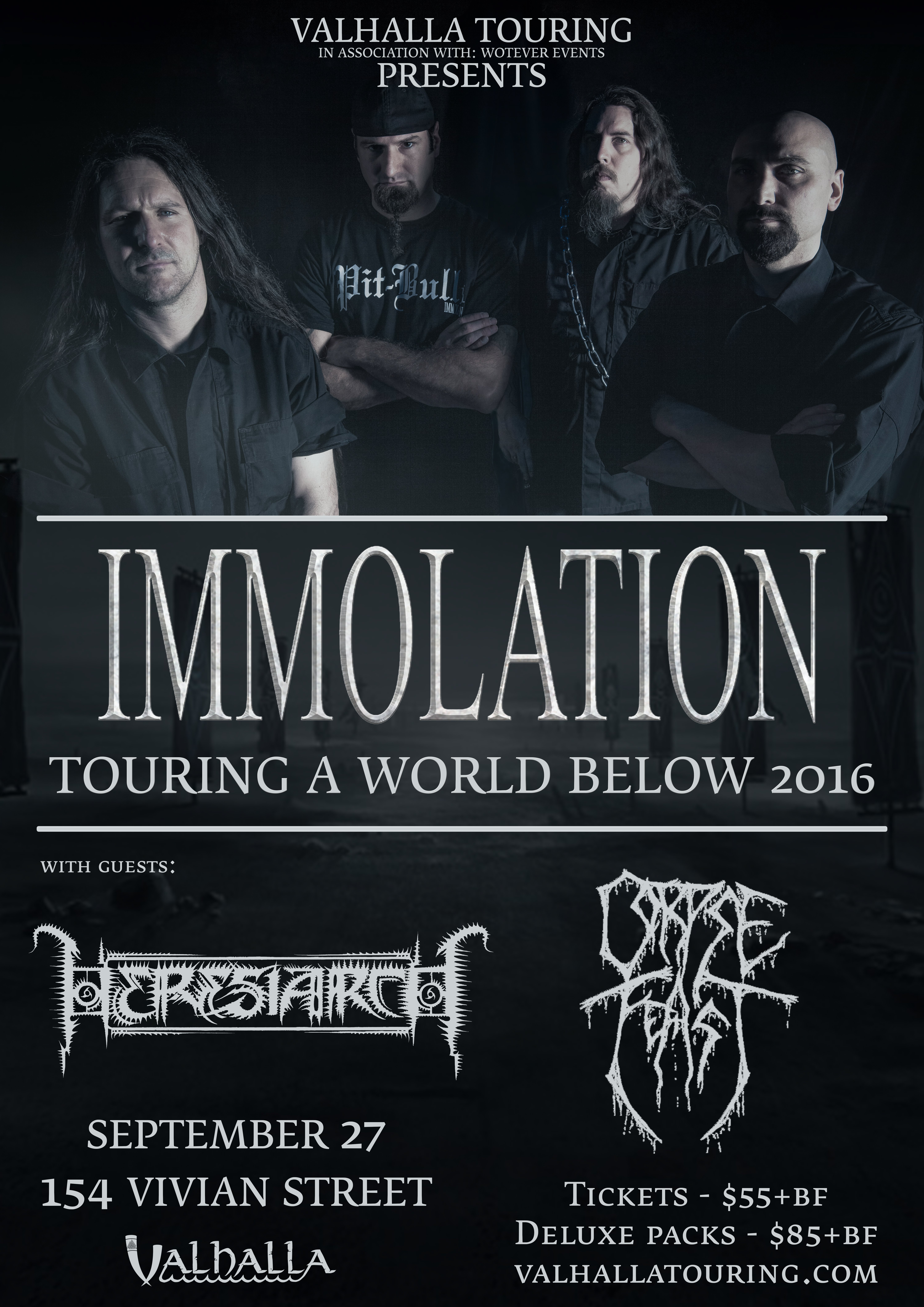 One of the founding bands of extreme music, Immolation, are coming to invade New Zealand this September.

Surely the most intense, suffocating show this year at Valhalla. Immolation have been delivering some of the most unique, and creatively dark, death metal the underground has witnessed for over 25 years. Spewing forth unrelenting, chaotic and twisted sonics while continuing to push the limits of a genre they helped define. 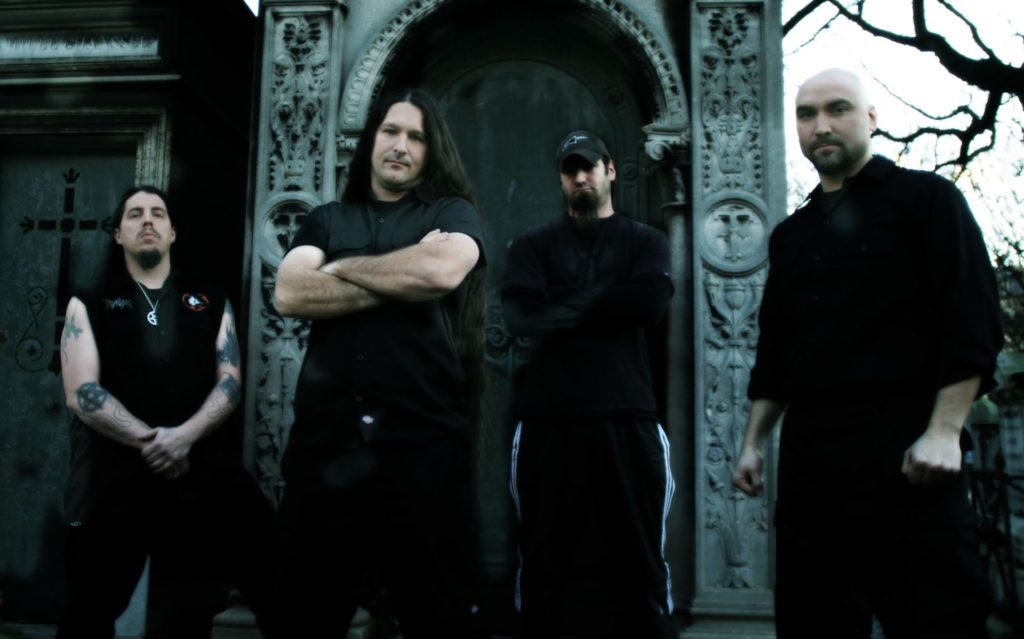 Bursting onto the metal scene in 1986, Immolation went on to lead the charge of first wave of US Death Metal. Alongside their peers Cannibal Corpse, Morbid Angel, Deicide & Obituary they created a scene unlike any other.

Spawning classic albums Dawn Of Possession (1991), and Here In After (1996) early in their career they paved their way down an ever evolving path of uncompromising musical devastation.
Their uniquely original take on Death Metal is instantly recognisable; dark, ominous, complex and chaotic. Each release has seen Immolation continue to dive deeper and deeper into the abyss, pulling the listener in with them. Refining their sound into a honed weapon of sonic destruction and creating some of the most adventurous death metal ever made.

With their latest release, Kingdom Of Conspiracy, Immolation are stronger than ever. The album is the fastest, most menacing and grim offering the band have ever released! A soundtrack that mirrors the current state of our world more than we choose to admit or accept.

Witnessing Immolation live will go beyond all your expectations and will leave you crumbled on the ground in a pile of ash,…thanking the band for every minute along the way that led you there.

With Special Guests Heresiarch and Corpsefeast

Augmenting the next ordinance of martial Black/Death Metal, HERESIARCH returns for the first live appearances since 2014. The manifest is the same, atavistic, unyielding blood lust for the coming Wolf-Age and humanities inevitable descent into chaos, violence and destruction. Brandishing militant drumming, relentless grinding guitars, pummeling bass, and deranged chaotic guttural grunts as an weapon of barbaric force, HERESIARCH is primal aggression at it’s most unrelenting. No surrender.

Unrepentantly old school,  CORPSEFEAST are the kings of underground brutal death metal in NZ from the 90’s. 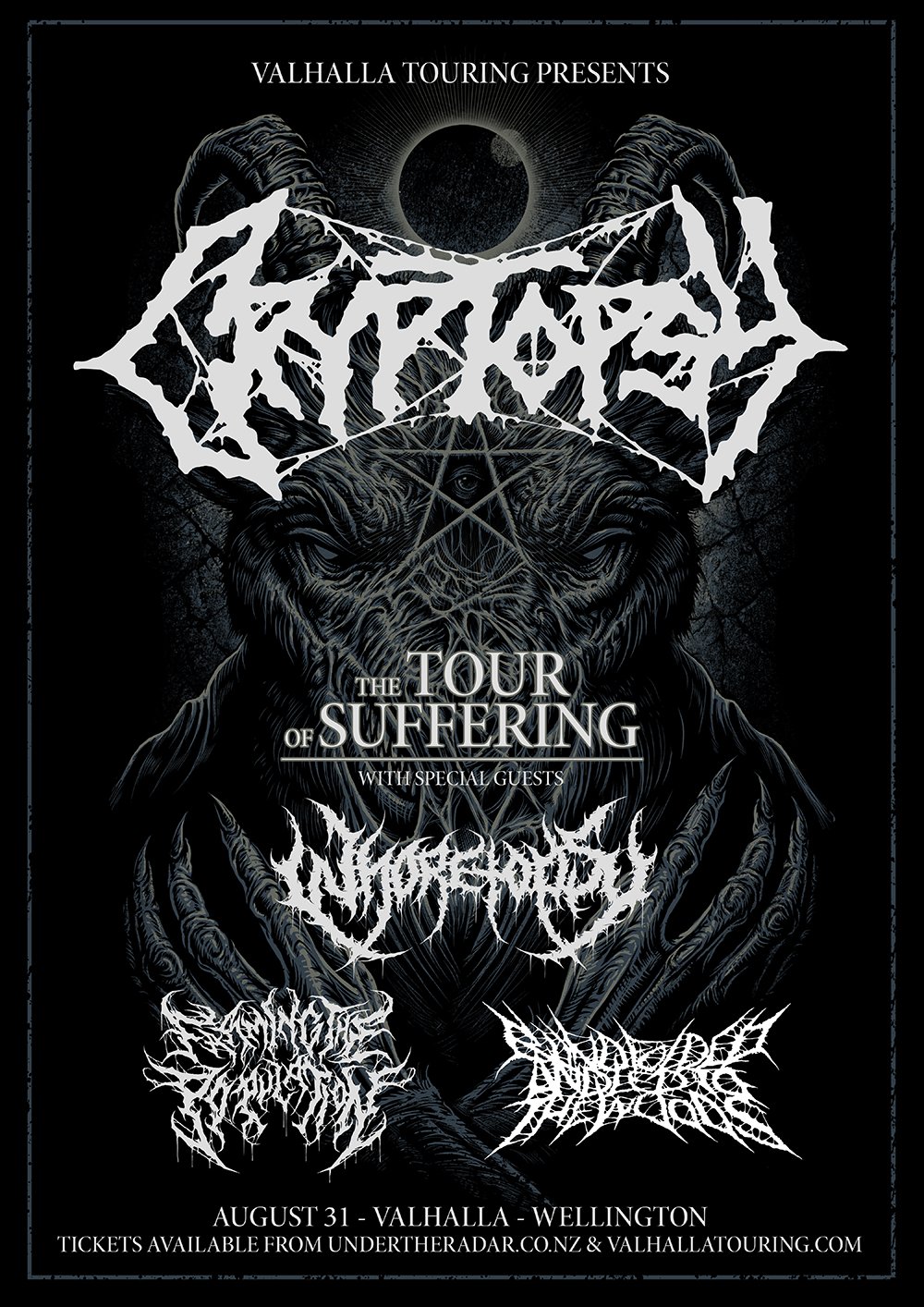 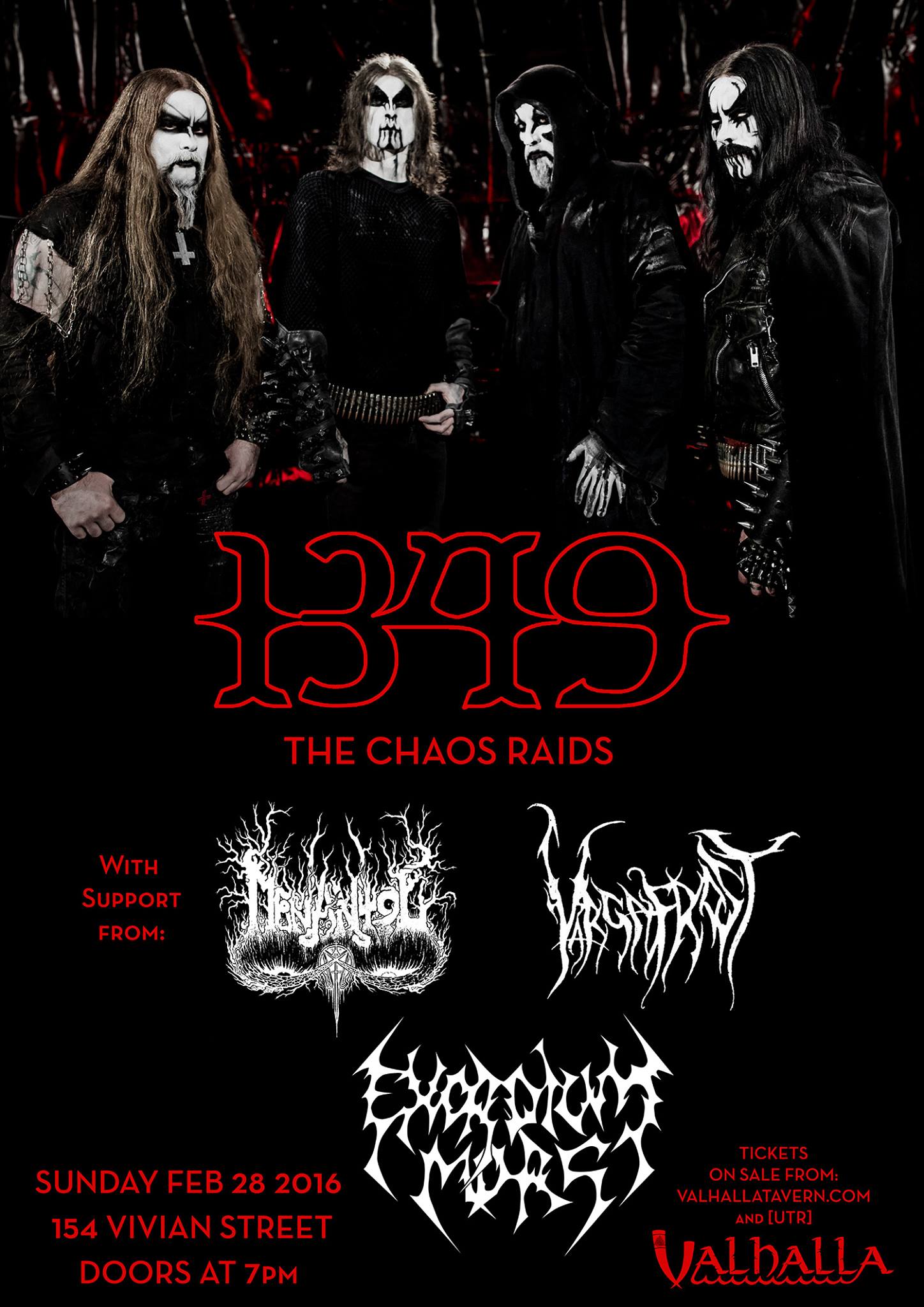 Founded in Norway in 1997, 1349 have remained a constant influence on the Norwegian black metal scene. With a penchant for lightning speed riffing, blazing drums, and apocalyptic lyrics, the band has trail-blazed the underground, surpassing many of their peers through brute musical force.

Countless US tours with dark luminaries such as Carcass, Cannibal Corpse, Celtic Frost, Suffocation and Behemoth, this will be 1349’s first time ravaging our shores, finally unleashing their sermons of Chaos upon New Zealand Masses.

Blending raw melody, dark, bloody atmosphere and aggressive low-fi production, the first three albums, Liberation (2003), Beyond the Apocalypse (2004), Hellfire (2005) were a benchmark of high tempo blast beats, frenetic tremolo riffs, caustic bass and biting venomous snarls. During late 2008, 1349 recorded its fourth album, Revelations of the Black Flame. Revelations of the Black Flame marked a change in direction for the band, as songs on the album were slower than previous releases, and there were also some dark ambient and industrial-tinged tracks. 1349 released its fifth album, Demonoir, on 26 April 2010. The album shows a return to 1349’s earlier sound, before Revelations, while continuing the low-fi production and ambient sensibilities.

Their latest opus Massive Cauldron of Chaos is the pinnacle of their craft. The band are more than a hyper-blasting, scream fest. They often explore the slower, darker and more experimental side of black metal, while still retaining the spirit of total chaos. Capable of blending a deeper and more sinister darkness with extreme intensity and venomous aggression, 1349 are true innovative of the genre.

1349 will unleash a torrent of sonic hellfire, converting NZ audiences to their unholy cult – no one will be spared as they spread plague and chaos across the land…